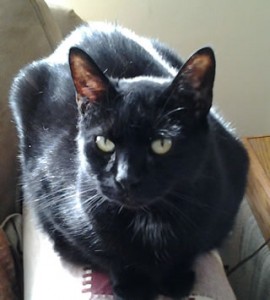 I adopted Mushy from Paws several years ago. When Mushy arrived at PAWS, she was afraid of people. She was the first cat I socialized at PAWS. Now I think this was because Mushy wanted to give and receive love, not anything that I did.

After Mushy was adopted and returned twice, I decided to give Mushy her forever home. The first week she slept in my arms every night. She loved to cuddle and was a true lap cat. Last week Mushy crossed the Rainbow Bridge. She will be missed.