In Loving Memory of Lola-Claire 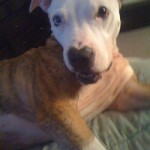 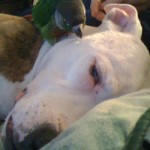 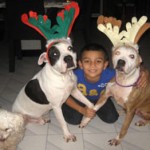 We are saddened by the passing of Lola-Claire, long-time PAWS dog who had been surrendered to us in 2006 by her owner who had kept her crated almost constantly. We were horrified by her condition, and took her in and treated her, and named her Claire. She was with us for quite some time, then adopted into a home where she was doing well, all seemed to be looking up for her, and then the couple split up and Claire, who had been renamed Lola, came back to PAWS. She won the hearts of many at PAWS, with her quirky, funny ways. She was a favorite of volunteer Margie Fittin and employee Beata Kulikowski. Margie made certain that Lola-Claire had a place to go when PAWS had to leave North Willow Street in 2008, and she and Beata would drive up to where Lola- Claire and another PAWS dog, Justice, were temporarily residing, to visit and walk them.

At that point we had the great fortune of another dedicated PAWS volunteer, Brianna Greenberg, come to the rescue with an offer to foster a dog for us, and Lola-Claire really needed the opportunity. Brianna fostered Lola-Claire for several months, working with her and giving her the chance to settle into a home atmosphere and even make the acquaintance and keep company with Brianna’s birds. At this time, PAWS had established our shelter/sanctuary space in northern New Jersey, complete with live-in caretaker Jennifer Rodriguez on site, so we moved Lola-Claire as it seemed adoption was not likely for the older, protective pit bull mix. It was here that Lola-Claire found her pack when Jennifer and her brother Alex introduced Lola-Claire to Jennifer’s dogs Apollo, a former PAWS pit bull, and Precious, a small poodle. Everyone was astonished to see that Lola-Claire actually enjoyed the company of these dogs, and she happily settled in with Jennifer and her family. She, Apollo and Precious became the unlikely threesome, living together in peace and enjoying family life in a home, and not a kennel.

PAWS is thankful for all who gave of their time and love to be sure Lola-Claire had a good life surrounded by those who really cared about her. We especially thank Jennifer and Jaythan for accepting Lola-Claire as a “permanent foster” into their home, providing her with love, home-cooked meals, and the run of the house and yard with her friends Apollo and Precious (and sometimes Jenn’s mother’s dog, Chihuahua Luli!).

Rest in peace, little Lola-Bunnies from your devoted PAWS family.