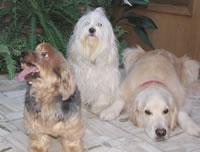 What seemed to be a “quick and easy” adoption turned out to be anything but… Teddy’s former caretaker contacted PAWS asking if we would be able to rehome Teddy (then “Buddy”), an older Yorkshire terrier. Teddy had been the cherished pet of this person’s mother, who passed away, so Teddy landed in the daughter’s home. They could not keep him as they had their own dog, and just did not have the time or money for another dog. Teddy was immediately taken into our foster home, where he was very apathetic, was limping, and just seemed out of it. PAWS immediately took him to WCAH, where it was found that he suffered from multiple issues, one being a serious bladder stone condition that required surgery. After finally recuperating from his surgery and infection, Teddy was adopted by an awesome couple and their two other dogs. He requires ongoing medical attention for his diabetes insipidus, which it was discovered that he had as well…this great couple and their extended family is able and willing to give him everything he needs, and life is great for Teddy!