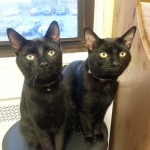 It has been almost two years now since my “boyfriend” and I adopted Jack and Inky. Two feral kittens who with a LOT of baby food, eventually opened up and became big mommy’s boys! A lot has happened in these two years. Their names are now Salem and Pumpkin. My boyfriend and I got married, he joined the army, we all moved to NC, I had a baby boy, we adopted a third furbaby puppy who they surprisingly LOVE, and now we have our second baby boy on the way. These little guys are truly part of the family and I would never go anywhere without them. They have come such a long way.. from being frightened of everything, to RUNNING full speed to mommy as soon as I call them! Thank you SO much to Kristina for adopting out my first baby boys to us. I could not imagine life without my Salem and Pumpkin.